Apostle Titus of the Seventy and Bishop of Crete

Saint Titus, Apostle of the Seventy was a native of the island of Crete, the son of an illustrious pagan. In his youth he studied Hellenistic philosophy and the ancient poets. Preoccupied by the 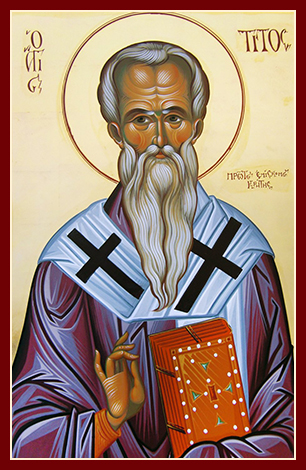 sciences, Titus led a virtuous life, not devoting himself to the vices and passions characteristic of the majority of pagans. He preserved his virginity, as the Hieromartyr Ignatius the God-bearer (December 20) testifies of him.

For such a manner of life the Lord did not leave him without His help. At age twenty St Titus heard a voice in a dream, suggesting that he abandon Hellenistic wisdom, which could not provide salvation for his soul, but rather to seek that which would save him. After this dream, St Titus waited yet another year, since it was not actually a command, but it did guide him to familiarize himself with the teachings of the prophets of God. The first that he happened to read was the Book of the Prophet Isaiah. Having opened it to the 47th Chapter, he was struck by the words, speaking as it were about his own spiritual condition.

When news reached Crete about the appearance of a Great Prophet in Palestine, and about the great miracles He worked, the governor of the island of Crete (an uncle of Titus) sent him there. This Prophet was the Lord Jesus Christ Himself, incarnate of the Most Holy Virgin Mary Who came into the world for the redemption of the race of mankind from the oppression of ancestral sin.

At Jerusalem, St Titus saw the Lord. He heard His preaching and believed in Him. He witnessed the sufferingand death of the Savior on the Cross, His glorious Resurrection and Ascension to Heaven. On the day of Pentecost the future apostlle heard how the Twelve Apostles, after the descentof the Holy Spirit, spoke in various languages, among which was the Cretan language (Acts 2: 11).

St Titus accepted Baptism from the Apostle Paul and became his closest disciple. He accompanied St Paul on his missionary journeys, fulfilling the tasks entrusted to him. He was involved in establishing new churches, and was with Paul in Jerusalem.

St Titus was numbered among the Seventy Apostles and was made Bishop of Crete by the Apostle Paul. Around the year 65, not long before his second imprisonment, the Apostle Paul sent a pastoral epistle to his son in the Faith (Tit. 1: 4).

When the Apostle Paul was taken like a criminal to Rome to stand trial before Caesar, St Titus left his flock in Cretefor a time and went to Rome to be of service to his spiritual Father. After St Paul’s death by martyrdom, Titus returned to Gortyna, the chief city of Crete.

St Titus peacefully guided his flock and toiled at enlightening the pagans with the light of faith in Christ. He was granted the gift of wonderworking by the Lord. During one of the pagan feasts in honor of the goddess Diana, Titus preached to a crowd of pagans.

When he saw that they would not listen to him, he prayed to the Lord, so that the Lord Himself would show to the mistaken people the falseness of idols. By the prayer of St Titus, the idol of Diana fell down and shattered before the eyes of all. Another time St Titus prayed that the Lord would not permit the completion of a temple of Zeus, and it collapsed.

By such miracles St Titus brought many to faith in Christ. After bringing the light of faith to the surrounding regions, St Titus died peacefully at the age of 97. At the time of his death, his face shone like the sun.